4. The environmental impact of Electric Vehicles and a surprisingly good alternative.


The problem that I have with electric vehicles is that we are told they are emissions free. They are once they are produced and until the batteries fail. Before and after those times they are pretty damned far away from emissions free and very close up to an environmental disaster.

Do we care? Well yes we should. If we're stipulating the entire known future of personal transport, we ought to at least consider the complete environmental impact. After all, that's why the change is happening at all.

Why are EVs a new environmental disaster?

This is a Zero motorcycle battery. Yours for £6000. 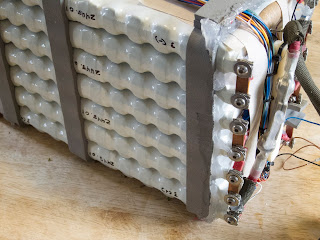 Ok, I'll expand a bit. You knew I would.

You know how petrol comes from oil and oil is really difficult to get at because nature cleverly buried it deep under the ground or seabed, out of harms way? And how when you burn petrol or diesel the fumes kill the planet?

They contain rare metals. This has a pattern of increasing as the technology progresses.

The important word here is "rare".

If something is rare, it's usually difficult to get hold of and expensive. Once you decide that something as popular as, let's say personal transport, should be based upon these rare materials; you could reasonably expect the existing relatively easy sources of these rare materials to be used up.

After that, it means more destructive methods of extracting them. Like mining.

Maybe it's just me, but we aren't really progressing beyond the "digging bad stuff out of the ground and seeing how long it lasts" phase.

A lot of these things really are better off left under the ground.

These Lithium ion batteries are recyclable. The metals inside them are the parts that can be recovered.
But there are very few places that can actually do this and there is no current plan to upscale all these batteries, most currently go to waste.

The other environmental issue with electric vehicles and forcing people to buy them, is that making a new car, comes at a price. Producing a new car creates a lot of carbon.

Here's an idea, just for a giggle. See what you think.

Imagine there was a fuel that you could use in existing internal combustion engines that produced 85% less CO2 than petrol or diesel.

This fuel is in itself carbon neutral.

It has an inexhaustible supply.

Using that supply rather than not using it, actually has a massive benefit in reducing greenhouse gases.

It doesn't need mining or extracting and being inexhaustible, it's not rare.

Does this sound like a vaguely good fuel source? It could be.
It's called Bio-CNG.

Before I get into what Bio-CNG is and how it can be used to power existing combustion engines, let’s talk about cows. You’ll probably have seen in the media stories about how cows are killing the planet because of their constant farting and defecating, which releases methane which is a greenhouse gas, so we should all eat beans and plants (presumably causing us to fart a lot).
Well, cows aren’t the only thing that produces methane. Waste food does as well and agricultural waste and other organic waste products.
We produce a vast amount of methane from all of these sources, almost accidentally and almost all of it just disperses into the atmosphere and becomes a harmful greenhouse gas. We don’t do anything much with it. It’s free for the taking.
With a bit of clever science and jiggery pokery, it can be turned into the most amazing fuel, this fuel is called Bio-CNG or Biomass Compressed Natural Gas. Once it’s become Bio-CNG it can be used to fuel combustion engines, like the one in your bike, or car, or van.
Bio-CNG contains 92-98% methane and 2-8% CO2. The amount of CO2 produced by bio-CNG is the same as the amount captured by making it, this means that Bio-CNG is 100% carbon neutral.
The calorific value of bio-CNG is 52,000J/Kg. That’s how much energy it can release per kilogram when burned.
That compares with 45,800J/Kg. For petrol. So it’s better than petrol.
It’s also an ideal fuel to use in an internal combustion engine.

The production process for making bio-CNG produces a by product, which happily turns out to be an enriched organic manure. That’s handy.

The use of bio-CNG in vehicles reduces the emissions of nitrous oxide, hydrocarbons, carbon monoxide, and carbon dioxide by 40%, 90%, 80%, and 25%

Research shows that the effect of producing bio-cng and then using it to power vehicles has less of an environmental effect than that of all electric vehicles. This takes into account how electricity is produced, battery production and recycling, production of electric drive-trains, the whole shebang,

The Uk’s target of reaching zero carbon status by 2050 is why the 2035 petrol and diesel vehicle ban is in place. But we don’t yet have access to vehicles that can practically replace petrol and diesel engined vehicles for most people and businesses.
It will be many years before we do and will require a massive infrastructure change as well as leaps in technology for batteries.

Bio-CNG works now and would put us well on the path the zero carbon a whole lot quicker. Granted it would require investment in bio-CNG production plants, but the environmental impact of these is incredibly low. The fuel is superb, better than petrol or diesel, it’s cheap to produce and there are basically no downsides. The fuel is stored in tanks, the same as LPG and conversion of existing vehicles to run on bio-CNG is far cheaper than buying an electric car. Plus, you negate the massive environmental impact of producing a whole new car. New vehicles fitted with bio-CNG systems would cost only a tiny premium over a standard petrol or diesel engined one.

This all sounds great. So what is the UK doing about bio-CNG? Absolutely nothing. Most people aren’t even aware of it’s existence.

Next time, I discuss what perhaps we can do that falls within the Government's new legislation but improves upon their own narrow vision.
Posted by Rod Young