What makes a motorcycle ride an "Adventure"?

But what makes a motorcycle ride an adventure? 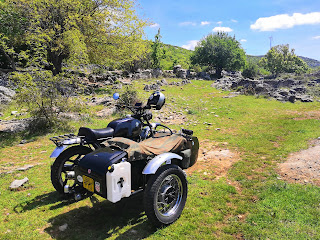 Clearly for me, it's not adventure trousers. I don't need a particular style of clothing to make me feel adventurous.

I read a lot of comments posted on various adventure motorcycling social media sites where the emphasis seems to be largely based around following the herd to a well know place or taking the well trodden path. A awful lot of people seem to want to be guided along the well trodden path by a precise route to a well known place that is often frequented by similar people doing the same thing.

Is this really an adventure? I don't think it is for me. I'm sure that if your current experience mostly involves riding to the local cafe in your adventure trousers then anything outside of that might be considered an adventure. Don't get stressed, I really do believe that adventure has different meanings for different people.

An adventure for some seems to mean travelling as far as possible by motorcycle, in as short a time as possible, covering as many different countries as is feasible, ideally with some exotic sounding locations included on the itinerary. But often these tours are performed in such a huge rush that there is very little time to actually appreciate any of the beauty or culture of the countries that the rider is passing rapidly through.

I got to thinking about this the other day when I set off from home and rode up into the mountains behind our home. After a brief 15km I was on part of what is known as the Trans Euro Trail, a relatively new part of the current Adventure motorcycling scene. The TET, as it is commonly known is a series of trails that have been researched and developed and freely shared in the form of gpx paths which people can use to follow a researched and proven off road trail around most of the countries in Europe.
I began by following part of the trail for a short distance, but became distracted by the outstanding beauty surrounding me and by my own sense of direction. I turned off the prescribed path without checking the route and began to enjoy the ride a lot more. I was on a similar type of trail in a similar area to the TET route, but for some unknown reason, it felt a lot more adventurous. I didn't even realise for several hours that I was not on the TET route. I had in the back of my mind a vague direction of travel, so when it came to a fork on the trail, I simply took the direction that I thought might lead me where I was heading, wherever that was.

It was only some time later, when I stopped and checked my location, that I realised that I had strayed. It felt good. It felt like an adventure. I wasn't following someone else's idea of a good time. I was never more than 50km from home.

I apply this type of riding to roads as well. If I'm away on a long trip, I don't really have any firm destination or plans. I have a vague sense of where to head, as in which country, but even that is flexible. I'll change my non-plan as often as I like, often based upon the weather or other factors.

Let's say I'm heading to Hungary and the weather their looks bad that afternoon, I'll turn off and head towards Austria if it looks better that way. I might end up heading back to Hungary the next day if it improves or not.

I might find myself in a particularly agreable place with an interesting town or just a good cafe. It might only be, say, 2pm, but I'll decide to stay there. If it's a really great place, I might stay 2 days or more. Then go back on the road.

All this is easily achievable with the resources available to us on the road. We all have mobile phones with booking.com or airbnb, every place in the world at any time of year will always have accomodation available somewhere, so why worry and pre-book, locking you into a solid plan that for me, at least, precludes any feeling of adventure?

I suppose that for me, adventure is synonymous with exploring. You aren't exploring if you are following the well trodden path, you are simply following in other's footsteps.

Ticking off a long list of notable sights or countries doesn't do it for me. I find my adventures in the unknown, the path that turns off the main drag, the random events and people I meet along the way.

What makes a motorcycle an adventure for you?

I am Rod Young, motorcyclist (adventures optional), sidecar builder and writer of The Sidecar Guides. Thanks for reading.