A custom built motorcycle and sidecar to give a young disabled motorcycle fan, the closest possible experience to riding a motorcycle, with his Dad in the riding seat.

It’s a familiar story, your Dad had a bike or maybe your Uncle did, you were just a snotty kid and everyone else was into cars, but you knew right from the first time you saw that bike that one day you’d have one. It was all that mattered, you’d spend hours poring through magazines or staring in the bike shop window; years before you were even old enough to hold a licence. You hit 16 and if you were lucky, you’re parents would allow you to have a 50. Soon you were 17 and that meant a 125, or if you’re a bit older, a 250. You still ride a bike now and you’ve filled your life with motorcycle related memories.

Nothing was ever going to stop me from having a bike; which is why I decided to build a rather unusual project for a young man named Luke.

Luke has a deep passion for motorcycles, he has done all his life, but for him there was to be no 50cc moped at 16, no 125 at 17 and for him, it was beginning to look as if he’d never get any closer to a bike than he was when aged 4, in the photo, next to his Dad’s Z1300. Luke and his Dad Alan are regular visitors to Mallory Park, where Luke especially enjoys the sidecar racing. The only thing stopping me from riding a bike at 16 was my parents, I just ignored them and got one anyway. 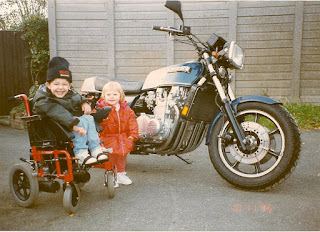 It was late Spring 2011 when Luke’s Dad first contacted me, with a simple enquiry. Would it be possible to fabricate a sidecar that would take a heavy, (122kg) powered wheelchair?

I thought about it for no more than half an hour and replied that basically, yes, it could be done and yes, I’d love to build it for him. You see, Luke can’t ignore his reason, he was born with cerebral palsy and will never be able to ride his own bike or even ride pillion. Sod that, I was going to build him one that he could ride.

Luke’s method of travel so far, has involved driving his wheelchair into the back of large converted car and spending the trip effectively in the boot. This is no way for a biker to travel. We exchanged a few more emails and soon decided to meet up.

Luke and Alan came to see me and we sat in the workshop talking about bikes and sidecars whilst I showed them some photographs of various sidecars that might spark some design ideas. Whilst we knew that this was going to be an extraordinary sidecar for it to be able to take Luke in his chair, we quickly established that it also had to look exceptionally cool and would not look like any kind of invalid carriage.

One other thing we knew, was that if we were going to do this, we’d need a large, powerful bike. Luke and Alan decided to go ahead with the project after much discussion and Luke soon became the owner of a low mileage, 2006 Triumph Rocket III, bought from their local dealer, Windy Corner. I sketched up an idea of what I thought the finished sidecar might look like and we agreed a complex and exciting specification. Not only would the sidecar be a unique and exciting design, but the bike would also be heavily modified. Luke was no sleeping partner during the whole design process, his ideas have shaped the design and specification from the start. I regularly receive messages asking if we can incorporate his latest idea into the design. 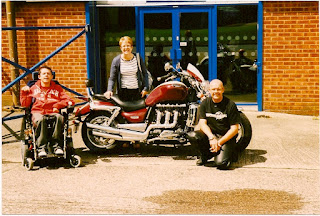 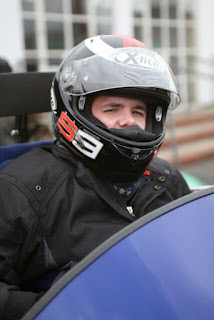 I named the project the Treble Express, as there is a theme of ‘3’ throughout the design. Those three huge cylinders on the 2300cc engine, three wheels in total and a stainless steel, triple tube designed upper space frame. The sidecar fittings are all custom made with stainless eye bolt fixings. The bike has a cut down back end to expose the huge 225 section flat profile tyre, the front end has been replaced with a super chunky, stainless steel leading link front end, with custom billet alloy yokes and a wide car wheel and 205 section tyre. A whole new brake system has been built, the rear brake activating the sidecar wheel and we have custom brake calipers along with custom wheel hubs. The exhaust system exits on the right hand side and be styled like the Triumph X75 Hurricane, three pipes in a stack, but much bigger! The sidecar has an entry ramp system that rolls away out of sight, underneath the floor whilst Luke will ride the sidecar from an aluminium-panelled cockpit, exposing him to the elements.


His wheelchair is held in place by electrically controlled belts.
Luke has his own set of Triumph Rocket instruments, speedo, rev counter etc., to help him achieve the full bike experience. All functions are enabled.
The body panels and the bike are painted in a blue and white scheme, the colours chosen by Luke, after much deliberation.

Luke collected The Treble Express from the Ace Cafe, on Sidecar Sunday in 2012.  He took his first of many rides on that day. There wasn't a dry eye in sight. It was emotional.

The Treble Express was shown at the London International Custom Show where it attracted much attention and admiration. 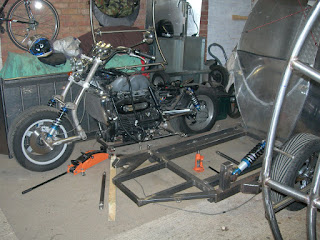 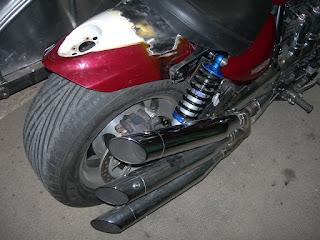 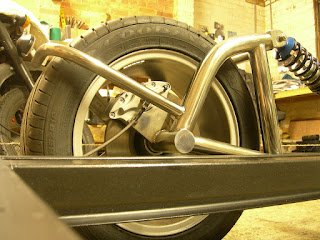 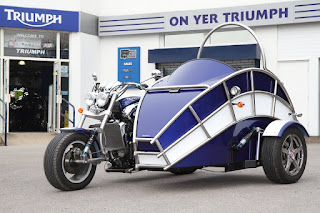 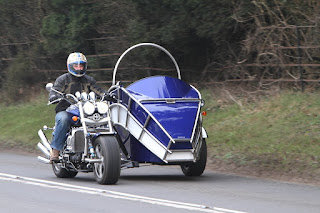 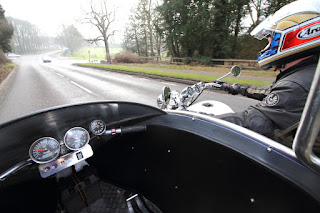 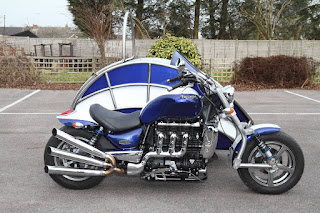