2. Doom and gloom, how useful are electric vehicles, some comparisons.

Leaving aside the discussion about whether or not we want an electric motorcycle,

let’s look at the practical issues with zero emission vehicles vs. the alternatives.

A few years ago I owned a van, a 2.2 litre diesel turbo engined long wheelbase van. I used it to make four journeys of 1200 miles each way to move home from the UK to Croatia.
Let’s imagine I wanted to do that now and internal combustion engined vehicles were not available.
Currently, the only full size all electric van available is the Renault Master ZE. It has a claimed range of 124 miles under test conditions, but real world tests have shown that to be more like 75 miles. In winter, Renault say this will go down to 50 miles due to the cold weather effect on battery range. At which point you need a full charge which takes 17 hours, there is no fast charge option. Another slight problem is that the van costs a shade under £57,000.
Mercedes, VW, Ford etc. have yet to begin production although they all have plans to introduce all electric large vans later this year or next, but with similar range capacity.
So, rather than being able to do my 1200 mile journey in 24 hours, with only brief stops for fuel, rests and food (which is what I did), how long would it take me with my electric van?

Given a 75 mile range followed by a 17 hour recharge, I would fail to get to the Channel Tunnel on day one. I’d eventually arrive at my home in Croatia 11 days after I left. At least I’d be able to have a good sleep during each 17 hour charge period.
My entire trip consisted of 4 outward bound journeys and 3 returns to the UK, so my total time for the move would be 77 days. That’s exactly 11 weeks. Or 2.5 months of travelling, not allowing for unpacking. That’s assuming I can maintain the same speeds as the old diesel turbo. Which I couldn’t as it would drain the battery even faster.
I’m not sure that’s acceptable for me.

OK, so I’m hoping that some progress will be made over the next 15 years of EV development. But I’m not aware of any revolutionary new battery technology which is likely to be around by then. Let’s say that range can be increased by 100% and recharging time reduced by 200%, I think that’s generous. My house move would take me a mere 1 month and 4 days.
That’s compared to the diesel turbo at 7 days for the complete trip.

It’s not great then, pretty doom and gloomy. I don’t see how vans are going to work, except in cities for local deliveries. What about motorhomes and camper vans? There’s no chance of them being even remotely useful for a touring holiday in the foreseeable future.

There are other serious issues with widespread or mandatory use of all electric vehicles.
One of those is charging and not just the time involved. If you have your own home and a place to park your vehicle off the street, then you can charge up at home. You can install a high speed charge point (at a cost) or use a 13amp socket. But what if you don’t have anywhere to park except on the street, like a large percentage of UK residents? Or what if you live in a shared building, like a flat with parking in a shared car parking area? How can you charge it in this situation? There are no answers for this at the moment.
The other massive issue is cost. Not everyone can afford to buy a new vehicle. These people, which includes me, will not be able to simply buy a new electric motorcycle after 2035 as they do not have the funds. There is virtually no used market for electric motorcycles although this will steadily increase if they become more popular. One factor that will make even this narrow option unattractive is the cost of replacement battery packs. They cost thousands of pounds and they don’t last forever. In daily use, an optimistic estimate is around 5 years. So it’s likely that people will trade in electric bikes just before the time the battery needs replacing, making used bikes an expensive purchase. 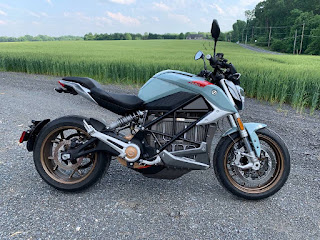 Things look a little bit better here since motorcycles are smaller and lighter, requiring smaller batteries, which means less charge time and better range. Zero are top of the game and have been for a while.
The 2020 model Zero SRF (above) will do 223 miles on a charge and can be recharged completely with the premium charger option at a normal charging station (not at home, unless you pay to have one installed) in 2.5 hours. Not bad. It will also reach speeds of just over 100mph.

However, those are the manufacturers claims. Real world tests show an average range of 90 miles on mixed roads. That includes leaving some juice in the battery, because like any EV, you really are stuck if you run it flat, so you always need to leave spare capacity in the battery.

Real world recharge times depend upon what the charge outlet provides. Its 5 hours for a full charge on a standard 13a household socket, to 1.5 hours for the highest rated socket with the extra super fast charging system optionally installed on the bike. But you're very unlikely to be able to use that in many places at all at the moment.

Did I mention charge cables for the bike? They are big and bulky. So if you want to ride further than 90 miles, you'll need to take them with you. One will fit in the tank locker (so long as you haven't had an extra battery installed here) The other will need substantial additional luggage space. They also don't come with the bike. The home charging cable costs an extra £445. 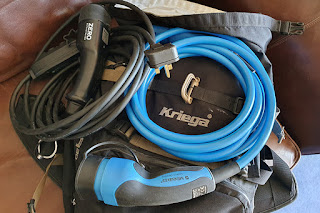 So, the current peak ev motorcycle has 90 miles useable range and needs at least 2.5 hours at most on the road charge points to get a 10% full battery to 95% full.


How useful is that bike? It works in cities, or for commuting up to 45 miles per day each way.

If i wanted to go to see my friend who lives 110 miles away, im in serious trouble of not making it there without at least an hours charge before my destination and only if i can charge the bike once i get there for 4 hours before i head home, via another charger before i do the last part of the journey. It's just about doable.

Any more of a trip than that and im looking at serious time issues. You can forget European touring. Or any kind of long distance riding.

What if we apply the technological improvement guesstimate used above?

We then have a range of 180 miles and a recharge time of 45 minutes to an hour depending on charge station performance.

That's a whole world better. Now it's a real world, useful bike. Not as flexible as a petrol engined bike, but pretty good. You could go touring on that, so long as the charge network was available. And of course, so long as my guesstimate is correct.

That still leaves the issue of charging if you park your bike on the street or somewhere where there is no access to a power point and the cost of buying new or used. A new Zero motorcycle with the range discussed above, is around £18,000. Other models are cheaper but you don’t get anything like the range capacity or the faster charging capability. I rarely pay more than £3000 for a bike. I’m never going to be able to buy a new electric motorcycle. If you buy a used bike, with a worn out battery, a new one will cost you over £6000.

Next time, I discuss the pros and cons of electric sidecar outfits.
Posted by Rod Young